Breaking…White House Going ‘All In’ on Assault Weapons Ban!

Breaking…White House Going ‘All In’ on Assault Weapons Ban! 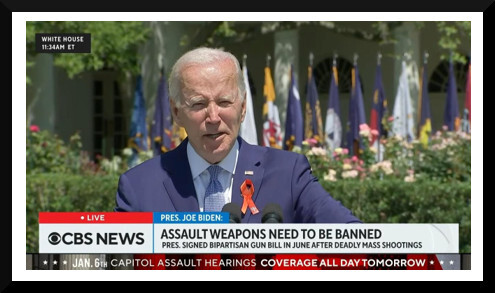 After passing a MASSIVE expansion of government through the U.S. Senate just days ago, Joe Biden and Congressional Democrats are fired up like never before.

Next up on their wish list: pushing H.R. 1808, Nancy Pelosi’s recently passed ‘Assault Weapons Ban,’ through the Senate.

“The White House is having conversations about what it can do to advance a bill banning the assault-style rifles that have been used in mass shootings.”

Earlier this year, we warned gun owners about “kamikaze-style” gun control from the Democrats as we head into the November elections.

We saw it from Biden, Pelosi, and Schumer during June and July.  And we’re about to see again from Schumer in the Senate.

With the Senate set to return from their break in just a few weeks, gun owners here in North Carolina must continue to hammer on Senators Burr and Tillis, to make sure they hold the line.

That’s why we’re asking all of our members and supporters to TAKE ACTION today — we cannot let this bill make it through the Senate and on to Biden’s desk.

Please make a special emergency contribution below so that PFA can keep up the heat, beat back this assault and protect our Second Amendment rights from being destroyed by these tyrants.