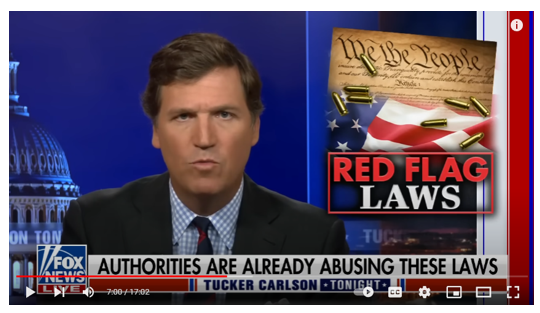 Backstabbing Senate Republicans are working to ram a bipartisan ‘Red Flag Gun Seizure’ bill into law before the American people learn how evil they really are.

Of course, you and I know that these laws crush your due process rights by allowing a liberal judge to seize your firearms BEFORE you’ve been charged, arrested, or convicted of a crime.

And thanks to Tucker Carlson’s recent episode on ‘Red Flag’ laws, millions of Americans are getting involved in the fight to defeat this Stalin-esque legislation!

Check it out here, or by clicking below:

As Tucker Carlson made clear, if an all-powerful government can take away our firearms before we’ve been convicted of a crime, then their power is almost limitless! We must stop them!

This legislation may be filed yet TODAY, and we’re doing everything we can to make sure that North Carolina’s entire Congressional delegation is hearing from every gun owner in the state.

RINO Republicans are doing everything they can to convince their colleagues (in both chambers) to go along with this proposal.

And with the NRA supporting ‘Red Flag’ laws, it’s vital that groups like the North Carolina Firearms Coalition can get the word out to gun owners! Please help shut this legislation down by making a donation NOW!

And please forward this email to every gun owner you know, so they can watch Tucker Carlson obliterate ‘Red Flag Gun Seizure’ legislation and join us in the fight to stop them!