Things are going from bad to worse in D.C. — fast.

As of this moment, H.R. 2377 has almost 150 co-sponsors and that number could climb much higher next week when Congress returns from their Memorial Day break.

To be clear, this legislation has already been considered and approved by the House Judiciary Committee, meaning it’s floor eligible right now.

And with the media, Congressional Democrats, and even some Republicans onboard with ‘Red Flag’ legislation, we could see H.R. 2377 on the floor for a vote at any moment! 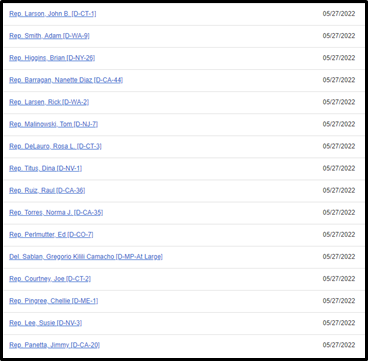 As we’ve told you for years, ‘Red Flag’ laws are the ultimate end game for the radical left.

Being able to use a liberal judge to confiscate ALL of your firearms and ammunition — without having to convict you of a crime — is much more important to the left than banning any one particular firearm.

This legislation lets almost anyone file these allegations in court. A bitter ex-spouse you haven’t seen in a decade, a roommate you had to kick out of your apartment a year ago, a family member you’ve not seen in years…the list goes on.

Remember, the hearing that determine whether or not you’ll lose your right to keep and bear arms happens in secret. You won’t know about these ex-parte hearings until the cops are at your door! H.R. 2377 is the end of your due process rights!

TELL YOUR CONGRESSMAN: HELL NO TO RED FLAG LAWS!

But ‘Red Flag’ laws are about much more than seizing guns from Americans through ex-parte hearings.

RINO backstabbing Republicans and the NRA think that doing away with ex-parte hearings — allowing you to be present during these proceedings — is all that’s needed to fix ‘Red Flag laws.

I want to be very clear: there can NEVER be a ‘good’ form of ‘Red Flag Gun Confiscation’ laws because they are based on the idea that the government can disarm someone who was never convicted of a crime in a court of law!

And if we go down this road and give the government the power to disarm Americans who have committed no crimes, the left will immediately work to expand the way they can use them.

In Washington State, politicians are trying to pass legislation that would let children be ‘Red Flagged’ at school and using that as justification to disarm the child’s parents!

That’s why it’s urgent that you sign your petition against H.R. 2377 immediately so that your Congressman (and Senators Burr and Tillis) know that you are opposed to ALL forms of ‘Red Flag’ laws.

The politicians in Congress who are backing this legislation are soulless ghouls. They don’t give a damn about the dead kids in Texas or the shoppers in Buffalo, NY.

They simply want to use the blood of these victims to carry out their long-term agenda of disarming the American people. They know that ‘Red Flag’ laws won’t stop a single killer!

So after you’ve signed your petition, please make a donation to help the North Carolina Firearms Coalition fight back against this legislation.

This bill could receive a vote in Congress at any moment. Please sign your petition and make a donation to help us fight back before it’s too late.

Then share this alert with every gun owner you know!

TELL YOUR CONGRESSMAN: HELL NO TO RED FLAG LAWS!

If this legislation passes, liberal judges will have the power to disarm you through secret court hearings and before you’ve been arrested for anything.

This bill could be voted on at any time! Sign your petition and then make a donation immediately to help the North Carolina Firearms Coalition fight back against this tyrannical garbage!