NCFC ads are running on full blast across North Carolina, blasting RINO Senators thanks to your generous financial contributions. 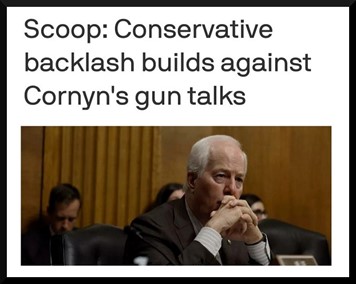 With the Senate coming back in tomorrow, and gun control “negotiations” having failed to wrap up last week, there’s more than just cracks forming in this raw “deal.”

Last weekend, TRAITOR Republican Senator John Cornyn fled town back to Texas, where he faced a hostile crowd at the Republican state convention in Houston over the weekend. Clearly gun owners in Texas – and across America – are furious with RINO Republicans.

It’s time to drive the NCFC grassroots machine right through the cracks in these negotiations and BLOW THIS DEAL UP!

I know you’ve made daily calls and emails. But I’m asking you to do it again today.

And if you can afford to do so, please dig deep and chip in as much as you can so that we have the resources to crank up the spending on NCFC ads running across the state.

RINO Republican Senators like Cornyn are trying to drag Richard Burr and Thom Tillis over the line, to stab us in the back. We can’t let that happen!

If we don’t keep up the grassroots pressure, Burr and Tillis may keep betraying us, just like they and eight other Republican Senators have in these last weeks by working on a gun control deal with the Radical Left.

If you’ve yet to join or renew your NCFC in 2022, there’s no better time than now!