There was a time when the enemies to our freedom were obvious and able to be seen from a mile away. And we still have those.

But over the last decade — and especially during the insanity 2020 and 2021 — bureaucratic agencies took on the role of dictator and enforcer in a whole new way.

In fact, these days, these bureaucratic attacks on our freedoms (cloaked in various alphabet agencies) are just as big a threat as Biden’s handlers and Congressional Democrats on Capitol Hill!

Last week brought a fresh reminder of this.

Several months ago, the IRS purchased 5,000,000 rounds of ammo. Many gun owners were trying to figure out why an agency that sits in front of a computer all day would need any ammo — let alone five million rounds.

Days ago, we learned that the Biden administration is looking to hire 87,000 new IRS agents! And one of the main skills these agents must have is a willingness to carry a gun and the ability to use it in deadly force situations!

Make no mistake, this is the kind of government our forefathers warned us about. 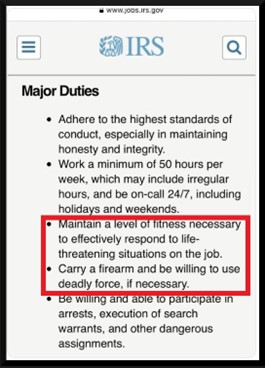 Of course, this comes on the heels of the FBI’s recent creation of profile parameters to make it easier for law enforcement agencies to identify ‘domestic terrorists’ — including anyone that owns a Betsy Ross or Gadsden flag!

We at the North Carolina Firearms Coalition — backed up by a massive number of members and supporters like you — make no bones about it. We’re in the fight for our lives as a state and as a nation, and we’re proud as hell to be on the frontlines fighting back!

NCFC has led the fight for Constitutional Carry law and the Second Amendment Preservation Act in Raleigh, and we have stopped every gun control bill in the General Assembly.

Leading up to the May primary election, we educated tens of thousands of gun owners in key districts before the election. And, armed with these facts, gun owners sent a massive message when they threw RINOs out of office in races all over the state.

And now we’re preparing our massive General Election program to expose EXTREME Socialists like Sydney Batch and Valerie Jordan, and their desire to disarm every single gun owner here in North Carolina!

If you’re not a member yet, now is the time to stand with us and the TENS OF THOUSANDS of other North Carolinians and fight back!

I know that many of you are already members, and I can’t thank you enough to standing with us through all of the fights of the last year.

But for those that are members, I hope that you’ll consider a special donation as we prepare for our upcoming battle in November. We’re not funded by NYC billionaires like Michael Bloomberg and George Soros.

Instead, we rely on every dollar we spend to come from our members and supporters in places like Elizabeth City, Boone, Whiteville, and Waynesville.

Our ability to reach out to massive numbers of gun owners this fall through using digital ads, our cutting-edge texting program, mass email deployments, and our infamous direct mail is up to the generosity of members like you.

The Radical Left is relentless, but so are we. And with your support, we’ll continue to meet them head on. Our children and grandchildren are counting on us.

P.S. With unelected bureaucrats in D.C. hiring another 87,000 IRS agents whose main qualification must include the willingness to carry a gun and use it in deadly force situation — it’s obvious that our freedoms are under attack from ALL SIDES!

The North Carolina Firearms Coalition is holding the line for freedom and we’re preparing to fight back with everything we have as we go into the General Election in November!

If you’ve not yet joined NCFC Nation — NOW is the time!

And if you’re already a member, please consider making an urgent donation so we have all the financial ammunition possible for waging the biggest political battle we can this fall!