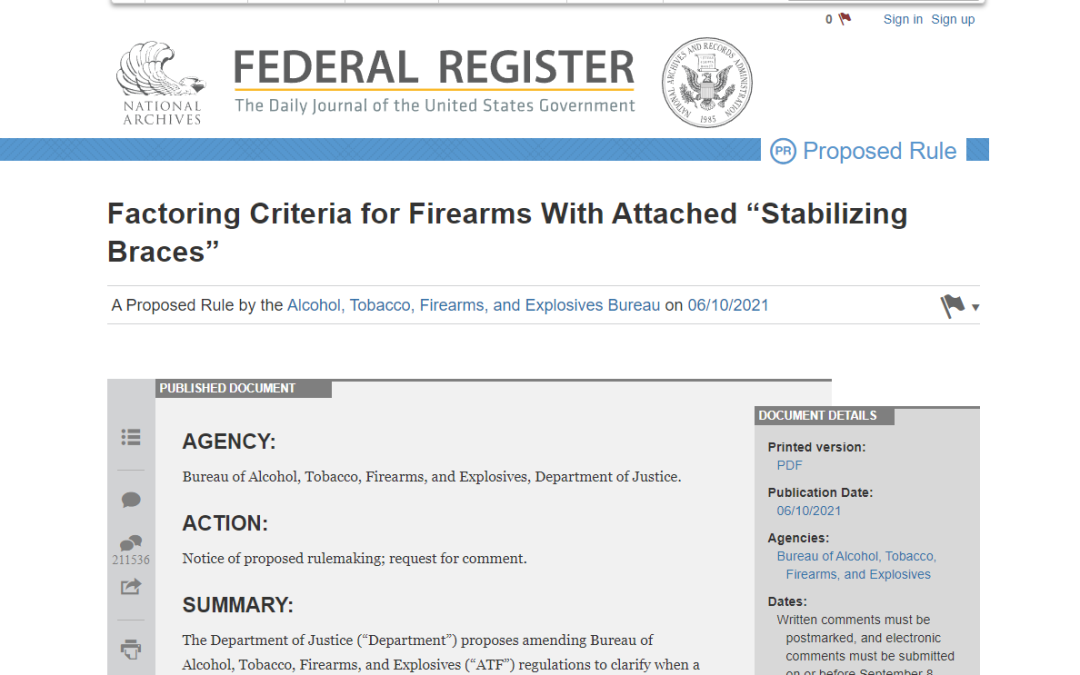 Joe Biden is attacking gun owners through legislation in Congress, bans on imports of firearms and ammunition, and through disastrous Executive Actions, too.

Right now, the ATF is drafting new regulations which would make criminals out of millions of guns owners overnight for ‘crimes’ like not registering their pistol braces with the federal government!

This garbage is nothing but a power grab, designed to allow Biden’s DOJ to prosecute as many gun owners as possible.

That’s why it’s urgent you FLOOD the ATF’s public comment section of their website, making sure that they know what you think of this blatant tyranny! We need to HAMMER THEM!

The good news is that dozens of Congressional leaders are doing the same thing, in a very public way. And between that pressure in Congress and the pressure that gun owners are bringing to bear, the Biden Administration is getting very nervous.

But the window to leave your comment won’t be open very long; it’s essential that you take action TODAY!

While we normally give you suggested language to use when contacting bureaucrats or politicians, this time we can’t as the ATF’s system is designed to eliminate duplicate emails.

So please stand up for freedom and leave your own comments right away! And when you’re done, it’s VITAL that you get this email to every gun owner you know and tell them to do the same thing!

It doesn’t matter if you don’t own a pistol brace.

It doesn’t matter if you’ve never heard of a pistol brace.

The days of not fighting back against tyrannical gun control unless it personally impacts us individually was a failed concept that the NRA employed for decades — at great harm to freedom!

If Biden can ban these items without pushback, he’s going to move right on down the line to the next accessory that his handlers tell him to attack!

After you leave your comments opposing the ATF’s power grab, I hope you’ll make a donation to help us push back against this attack on our gun rights.

North Carolina Firearms Coalition is already preparing legal actions against the Biden Administration, in the event that this regulation moves forward.

But we need your help to do this!

Please be generous, it’s the ONLY WAY we can maintain this fight.

Remember, effectively banning pistol braces through crippling regulations doesn’t have a damn thing to do with stopping crime!

This is about the radical left doing everything they can to attack law abiding gun owners and our ability to defend ourselves — while encouraging violent rioters and seeking to end cash bail!

So don’t be shy, leave your comment against this tyranny NOW!

P.S. The ATF is trying to make criminals out of countless gun owners who own pistol braces through new regulations, as part of Joe Biden’s Executive Actions against the Second Amendment.

The ATF website is open for your public comments against this unconstitutional, tyrannical action, but it won’t be for long. Please HAMMER their website immediately, opposing this garbage ‘rule.’

Then donate, so North Carolina Firearms Coalition can do everything in our power — including going to federal court to stop this — should these regulations take effect!