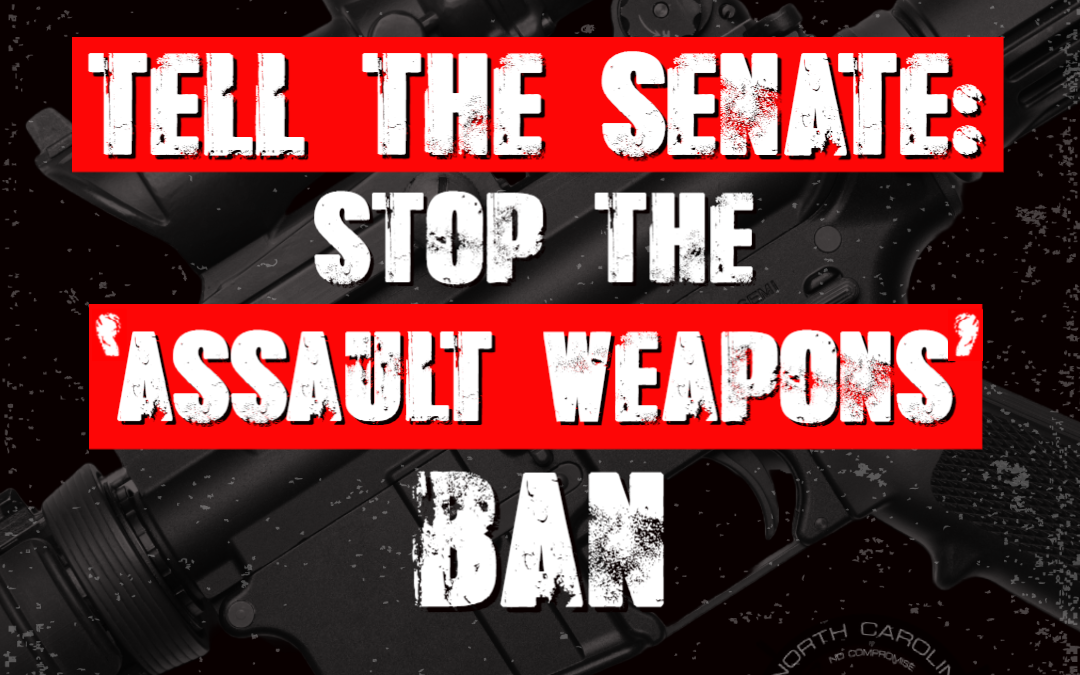 The biggest gun control battle of the year is going to kick off in just two weeks, and this fight is not just over our right to own an AR-15. It’s a fight over the future of our country!

While Nancy Pelosi was able to pass H.R. 1808 through the House with a few votes to spare in late July, thanks to the betrayal of multiple backstabbing Republicans – this fight was always going to be won or lost in the Senate.

The Senate has been on a summertime recess for the last month. But Michael Bloomberg’s organizations have been using this time to pound on RINO Republicans and vulnerable Republicans who are up for re-election this year to back the ‘Assault Weapons’ ban.

And after fifteen Senate Republicans (including Richard Burr and Thom Tillis) helped Joe Biden pass a massive gun control bill earlier this summer, gun owners like you and me can’t take anything for granted! So sign your petition immediately, calling on Senators Burr and Tillis to ‘VOTE NO’ on Biden’s ‘Assault Weapons’ ban!

H.R. 1808 is designed for one purpose: to begin the process of disarming the American people once and for all, leaving us armed with shotguns and hunting rifles, unable to defend ourselves against an out-of-control and tyrannical government.

>>> Buy any magazine that holds over 10 rounds of ammunition.

And make no mistake, the MOMENT they pass this legislation into law they would use the next mass shooting as a pretext to move on all AR-15s and similar firearms that are currently in circulation. So we can’t fall prey to Biden’s ‘I’ve already got mine trap.

This is not a drill! The midterm elections are rapidly coming into focus now. And while the Senate may remain in Democrat hands, the House is widely expected to fall.

Pelosi knows this. Schumer knows this. And Biden’s handlers know this. So the next two months may be their last shot in years to try to disarm the American people.

They will do everything they can to make this happen. And given how weak the Senate Republican conference has been over the last few months on the Second Amendment, anything is possible. That’s why we need to HAMMER on the Senate RIGHT NOW!

Please help us do that; contact Senators Burr and Tillis here!

During a normal election year, we’re exclusively focused on the General Election from August through election day. Having to divert badly needed funds to counter the ‘Assault Weapons Ban’ means we need to pull money from our election program. Or the other way around.

Your donation will help us to do both – battle against the ‘Assault Weapons Ban’ AND gear up for the General Election – at the same time! So please make a generous contribution today!

P.S. With the midterms coming fast, Senate Democrats and Michael Bloomberg’s front groups are doing everything they can to flip a few Republican RINOs to help them pass H.R. 1808 – Joe Biden’s ban on ‘Assault Weapons’ – before it’s too late!

And with so many Republicans backing Biden’s gun control legislation earlier this summer, we can’t take anything for granted. So please sign your petition immediately telling Senators Burr and Tillis to ‘VOTE NO’ on H.R. 1808.

Then chip in a donation so that we can mobilize gun owners against this legislation while gearing up for a massive General Election program at the same time.