That’s what most gun owners have said  when they see how much the NRA has spent electing anti-gun Republicans to the U.S. Senate.

The chart below lists 8 of the 10 Republican Senators who have signed onto the recently released “Red Flag” gun control deal who were heavily financially supported by the NRA.

At the top of the list is RINO king Mitt Romney, who the NRA spent more than $13.5 million DONOR DOLLARS to elect to the U.S. Senate. Including over $11 MILLION between our own traitorous Senators, Richard Burr and Thom Tillis! 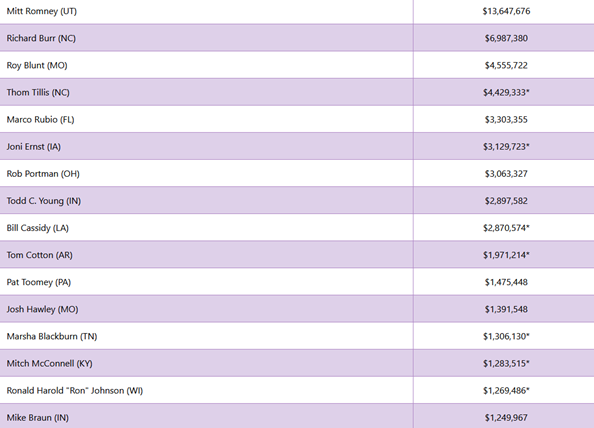 What’s worse, the NRA is refusing to take a position on the “framework” gun control that’s being tossed around on Capitol Hill and in the media, opting to “keep their hands clean.”

North Carolina Firearms Coalition staff spoke to a tremendous, pro-gun Congressman on Capitol Hill last week who indicated that he has not heard from the NRA in over three years!

If we’re going to DEFEAT this gun control freight train heading at us right now, we’ve got to lock arms, dig in, and realize that it’s us versus the gun-grabbers, D.C. Swamp Republicans (and Democrats) AND the NRA.

If you’ve yet to do so, now is the time to get on board as a member of the North Carolina Firearms Coalition — JOIN TODAY!