“The Supreme Court: A Tool of Tyrants!”

For decades, the gun-control crowd has tried to brow-beat gun owners into submission when federal courts ruled against our right to keep and bear arms.

In specific situations, these courts have upheld bans on open carry, bans on 30-round magazines, mandated storage requirements, ‘Red Flag’ laws and much more.

Each of these decisions were unconstitutional. But in every case, the radical left from the White House to the State House told gun owners that, “it’s the law of the land, deal with it.”

But now that the Supreme Court is weeks away from issuing what is expected to be a good decision for gun owners — the first in twelve years — the left is calling the Supreme Court ‘A Tool of Tyrants,’ and going all in to pack the court! 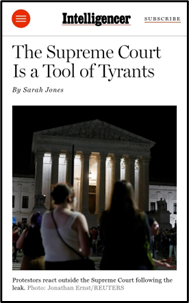 (New Yorker magazine, a mouthpiece for liberal elites, now calls the Supreme Court a tool for tyrants and wants to pack it with four more liberal justices.)

‘Packing the court’ means expanding the number of justices who sit on the court from the current nine to thirteen. And since Biden would be the one selecting these four new judges, America would suddenly have a radicalized 7-6 liberal court!

All it would take to do this is a simple majority vote in the House and Senate, along with Biden’s signature, and it would be done.

This legislation (H.R. 2584 and S. 1141) has been filed, has the support of over 50 members of Congress, and has already been referred to the House Judiciary Committee for consideration!

A packed court would be the end of our Second Amendment rights. Please note, we’re not saying that the courts are the source of our rights. Those come from God and are guaranteed in our United States Constitution. But hostile rulings hurt; it’s that simple.

If you care about our nation’s border security, we need to stop court packing.

If you care about the life of the unborn, we need to stop court packing.

If you care about our nation’s election integrity, we need to stop court packing.

If you care about America’s water rights and food security, we need to stop court packing.

The list goes on and on. A radicalized 7-6 leftist court on a mission to attack the very fabric of our country could do almost limitless damage to our freedoms as gun owners and Americans!

Fight back! Sign your petition telling your Congressional delegation that you are 100% opposed to court packing, and they damn sure better VOTE NO on H.R. 2584 and S. 1141!

Republicans in D.C. need to hear from you, telling them to grow a real backbone, dig in their heels, and do everything in their power to defeat this legislation.

Democrats in D.C. need to hear from you, too, telling them that if they dare to pass this legislation into law, they will enter a decades-long minority in Congress.

Once you’ve signed your petition, you’ll be taken to a confirmation page and given a chance to make a donation to help us mobilize every gun owner we can find into opposing this bill.

I’ll be honest. The North Carolina Firearms Coalition didn’t have a line item in our budget for this fight when the year began. We were aware of this threat, but it was a back-burner issue at that time.

But now this fight is hot, and we need to be able to get the word out fast. So please consider a donation of $100, $50, $25 or even just $10 so we can rally gun owners against court packing!

This is urgent, and every single freedom that you care about is on the line. So please donate TODAY!

P.S. In addition to America-hating members of Congress and Biden’s Presidential Commission that is working to pack the court, hundreds of leftist media outlets are joining the fight.

These people hate our country. And they know that seizing control of the Supreme Court — by packing it with four more hyper-liberal justices — would allow them to do terrible things to our gun rights and the rest of our freedoms.

After you’ve signed your petition, please make a donation to help us get every gun owner in the state involved in this fight. All it takes is a simple majority vote in Congress, so act fast!