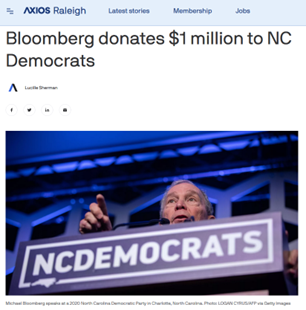 Bloomberg just dropped ANOTHER $1,000,000 on North Carolina House and Senate races to make sure that Republicans don’t gain a veto-proof majority in the elections!

Here’s why this is so important.

As we’ve all seen, however, we can get whatever gun-rights legislation we want through the General Assembly in Raleigh, but they can’t become law if Roy Cooper can simply veto the bills and get away with it.

But that could all change on November 8th and Michael Bloomberg knows it.

Here’s why: Republicans have to flip three seats in the State House of Representatives and two State Senate seats in Raleigh, and they will have a veto-proof majority.

If Republicans get a veto-proof majority, that means they can pass Constitutional Carry or any other gun rights bill that gun owners demand, and if Governor Cooper vetoes it, they can come right back and cram that veto down his throat in a veto-override vote!

It’s all hands on deck.

Not only that, but NCFC is the only gun rights organization in the state to have targeted ads blasting in key districts like House District 54 and Senate District 3 RIGHT NOW, and we need your help to crank up the heat in the final week!

And these are some of the same districts that Bloomberg is targeting.

I know it’s a stretch, but if it’s a stretch too far, please consider chipping in $50, $35 or even $20 to help us keep up the pace all the way through the finish line.

Oh, and please forward this email to everyone you know so that they can get the 2022 NCFC Gun Rights Voter Guide before they head to the polls!

It’s time to Stand and FIGHT,